VROC stands for Virtual RAID on CPU. It is software that Intel originally designed with the data center in mind, but extended to their enthusiast line of products due to demand for RAID support for NVMe. Intel built VROC into their latest CPUs in order to allow consumers the option of managing RAID through the CPU. VROC allows NVMe SSDs to connect via PCIe connections and yet be directly managed on the CPU. It is used primarily to allow for NVMe RAID with NVMe SSDs on the CPU side of the motherboard. If hardware RAID is used on the chipset side of the motherboard, then it would be limited by the DMI (direct media interface) speed. Most motherboards use DMI 3.0 which has bandwidth constrictions equivalent to 4x PCIe 3.0 lanes (the same limitation on one m.2 PCIe 3.0 x4 drive. VROC allows NVMe SSDs to access formidable speeds (up to double their already fast speeds) in a bootable format. Unfortunately, VROC only supports Intel SSDs at this times, so you cannot use VROC to setup RAID with Samsung M.2 Drives. 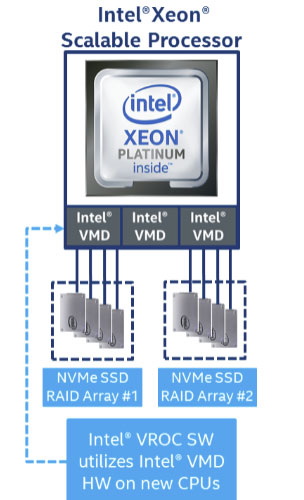 In the Fall of 2017, AMD released Threadripper drivers that support bootable RAID 0, 1, and 10 NVMe RAID from your CPU. So, if you have an AMD Threadripper motherboard with 2X m.2 ports OR 2X U.2 ports, you can set your PCIe 3.0 x4 drives up in a NVMe RAID 0 (twice the performance) or RAID 1 (a backup solution) setup. For RAID 10 (twice the performance, plus a backup solution), you would need 4X m.2 or U.2 ports - or 2X of one and 2X of another and a converter, so that you could use FOUR of the same drive. AMD's Threadripper NVMe RAID support is absolutely free. No need to add a dongle to your NVMe support.

Why Can’t I Use The Old RAID?

You can use the old RAID. You can use your chipset RAID just as you have always done. However, since the previous version of RAID was located on the chipset, it had to go through the DMI and was limited by the speed of the DMI (direct media interface). Your DMI sits between the chipset and the CPU and negotiates the traffic that goes between from all your chipset devices. The latest version of DMI is DMI 3.0 and it has a bandwidth limitation of PCIe 3.0 x4 lanes. 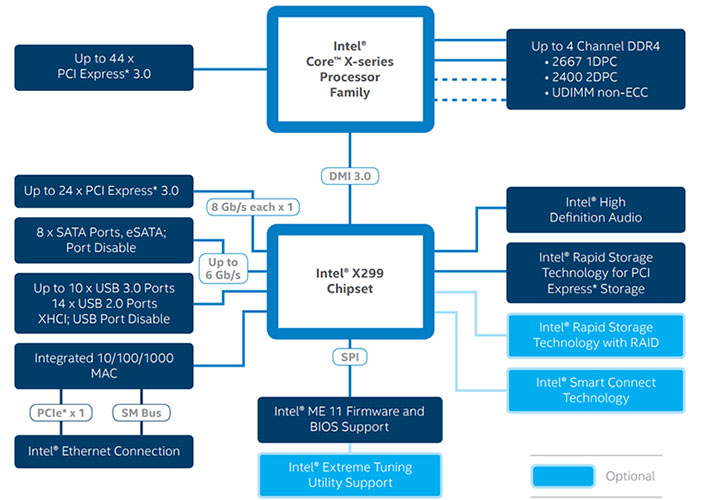 You might be asking, "why can't I just use a RAID card?" Again standard (old) RAID solutions operate using 4X PCIe 3.0 lanes on the chipset side of your motherboard. HOWEVER, HighPoint has come out with a solution that uses 16 lanes of PCIe 3.0 bus. High-end motherboards locate one or two PCIe 3.0 x16 slots on the CPU side of the motherboard. HighPoint's NVMe RAID solutions offer full use of your PCIe 3.0 x16 slot/s to create blazingly fast hard drive performance.

How Do I Know Which NVMe RAID Solution Is Right For Me?

That's a good question. It depends. A HighPoint NVMe card isn't cheap. An Intel VROC dongle isn't cheap either, but it is about a quarter of the price of a HighPoint NVMe card. So, if you have a Threadripper machine and you have enough m.2 or U.2 slots to use Threadripper RAID to suite your needs, just do that. Threadripper RAID is including in the price of your motherboard and CPU. I you have one of the latest high-end Intel motherboards that support VROC, if you want to use an Intel U.2 drive, and if you have enough m.2 or U.2 slots to use VROC to suite your needs, use VROC. Keep in mind, however, even if you are using VROC or Threadripper RAID, the number of lanes your m.2 or U.2 drives support will be the number of CPU lanes that your RAID setup takes up. If you intend on adding graphics cards or accelerator cards which use PCIe 3.0 x16 also, this may cause a bottleneck in your system, if you don't plan appropriately. Finally, if you want to use Samsung m.2 drives OR if you need 4X or 8X m.2 or U.2 NVMe SSDs OR your motherboard does not provide the correct ports, you can use a HighPoint NVME card to take advantage of NVMe speed.