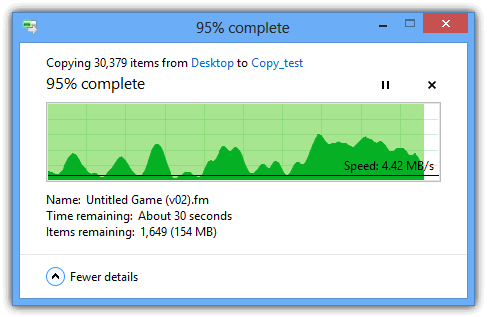 What do all the various hard drive and device connector speeds mean? At what speed can I expect my data to actually flow? The confusion with connector speeds and how fast a PC crunches data is partially because of the confusion between Megabits (Mb), Gigabits (Gb), Megabytes (MB), and Gigabytes (GB).

How Fast Are My Devices?

The following are various devices, slots, and connectors and their equivalent theoretical speeds: 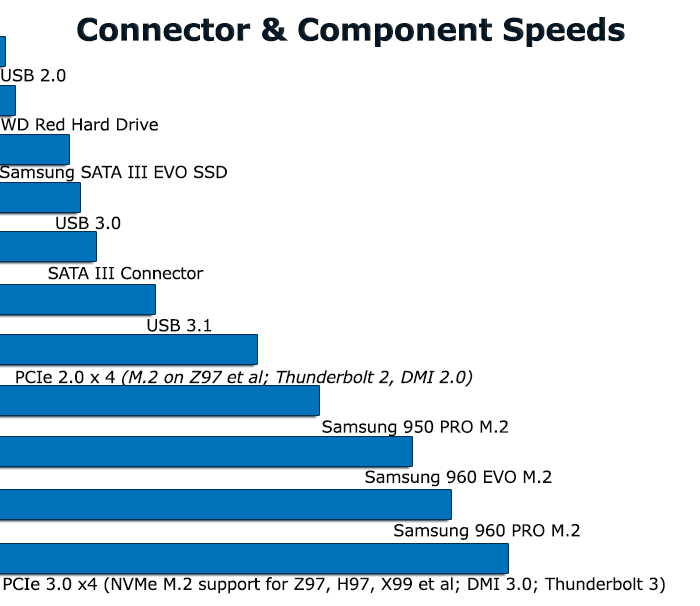 Remember, just because a connection has the theoretical potential for a certain speed, doesn’t mean it will reach that speed. Most standard (spinning) hard drives max out at around 150 MB/s. This is even less than the old SATA I specifications of 188 MB/s. So, for standard spinning hard drives, it doesn’t matter that SATA III specifications can go up to 750 MB/s, because the hard drive cannot.

Another example of a connection not running at its theoretical speed, can occur when you run a newer PCIe 3.0 x4 M.2 drives on an older motherboard such as a Z97 motherboard. The Z97 chipset operates off the PCIe 2.0 standard and so M.2 drives ran on Z97 can only run at the maximum speed of PCIe 2.0 x4, which is the equivalent of 2000 MB/s. Your 2500 MB/s or 3500 MB/s M.2 drive would not be able to run at full speed on a motherboard with a chipset that utilizes PCIe 2.0 x4. 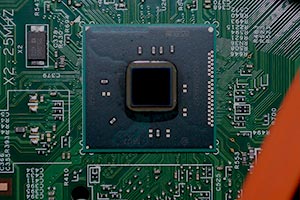 The Direct Media Interface (DMI) bandwidth is another limitation on your PC that a lot of computer users are not aware of. Most (BUT NOT ALL) Intel 100 Series chipsets (Skylake) utilize DMI 3.0, which gives the user a full 4 lanes of PCIe 3.0 to transfer between the chipset side of the motherboard (the Platform Controller Hub or PCH) and the CPU (or CPU controlled side of the motherboard). For Z170, H170, B150, and others, using DMI 3.0 means that 31.5 Gb/s of information can flow from one side of the PC to the other at any given point.

On most Z170, H170, and B150 motherboards, features such as M.2, SATA, Audio, Wi-Fi, USB, LAN, a TPM module, and lower level PCIe cards use the Chipset (PCH) to direct the flow of information. The chipset then determines which information will be allocated to go through the Direct Media Interface (DMI 3.0) to be processed by the CPU. Depending on what other tasks the chipset side of your PC is doing at any given moment, you might not be able to FULLY utilize the full 4 lanes of PCIe 3.0 your newest, lightning fast NVMe PCIe 3.0x4 M.2 drive or Thunderbolt 3 device needs to be processed at full speed, because you may be sharing bandwidth with some of the other functions on your chipset.

Typical Functions Controlled By The Chipset

When using an older chipset (for instance Z97,H97,X99,B150), the direct media interface is version 2.0. DMI 2.0 runs approximately half the speed of DMI 3.0 and won't be able to fully utilize the lastest M.2 drives.

As always, if you need any help deciphering your PC needs, don’t hesitate to contact us and ask one of our friendly technicians.